My first location that I got to start was in a parking lot of a grocery store that had left our neighbourhood. Also, at that same location, I wanted to have my urban farming operation on that same parking lot.

I had a rude awakening to lessons that quickly evolved to the way that I farm today.

My mentor, and founder of Fresh City Farms, Ran Goel, told me this that season, “Food is Political” – I had zero idea what he was talking about. Food? Political? How? That statement took me 4 years to fully grasp the magnitude of it

I planned to launch Thistletown Farmers Market, the spring of 2017 at a nearby parking lot – I got all the plans down, negotiated the use of space agreements with the owners. Prepared, printed and circulated flyers and posters to the whole neighborhood. I put in the work. The market was soon after moved to the parking lot and that’s where we ran it for the whole season.

What I learned was, food isn’t equal. There are two groups of people. Those who can afford, and those who cannot. I witnessed this as most of the demographic visiting my market, where those who cannot – and my mindset of how do I make money – found it difficult to converse with them. There were those who could buy the whole lot and they did on some occasions.

What I learnt was, food isn’t equal. There’s two groups of people. Those who can afford, and those who cannot. I witnessed this as most of the demographic visiting my market, were those who cannot – and my mindset of how do I make money – found it difficult to converse with them. There were those who could buy the whole lot and they did on some occasions.

Market Visitor: Hi this is great having a farmers market in our community
Me (enthusiastic) welcome! Yes, we are happy to be here! What can I do for you?
Market Visitor (perusing through the produce) that looks nice (pointing at the kale)
Me (now excited) while yes! I grew it myself about 5 minutes from here, infact, I harvested it today
Market Visitor: That’s great! But for the price, I can find it cheaper at a (and they name a grocery store)

And then, they walked away and left the market

This was literally the conversation I had every single day! With every single visitor to the market! Was my prices too high? What was I thinking? I called one of my mentors every market morning to ask if I was crazy and she consistently motivated me to keep being crazy and pay attention to the community.

So the next market day, I decided to do something drastically different – I decided to give away, my produce to anyone who said they can find it better at a (name your grocery store). Talk about a terrible business idea, toil all through the week to give away produce for free? Madness right?

When a market visitor came and uttered those exact words – I gave them the produce they were debating on. “You can find kale cheaper? Ok, take this, try it and next week, come back tell me what you think” I did this for all the produce we grew. What happened the following week, was actually incredible. Anyone I gave the produce to, came back saying the same thing “This tasted like a tomato!” or “This is what a beet should taste like”, my favourite was the escalation of the conversation

They started asking how much they can fit in for example $25. “How much produce will I get for $25?” It was great! We generated regulars, we had people who came to the market and stayed there with me just to chat. These regulars became the fuel for our 2018 growing season. They became farmshare members, even willing to pay for delivery of the said produce to their homes.

Thus, our CSA was born 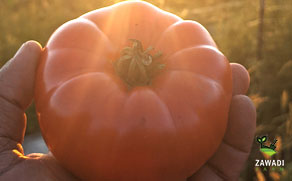 Support us by joining our economy.